Launch concert with Islington Centre for Refugees and Migrants

For our launch concert, we collaborated with “Islington Centre for Refugees and Migrants” which provides a safe place for refugees and migrants from all over the world, where they can meet, receive food and practical/psychological support, learn English, Art, Writing and Music.

We were honoured by the presence of the renowned actress Juliet Stevenson who is the patron of the charity. Romain Malan, director of the orchestra, works as a choir leader there:

The programme was called "All on a journey". Classical pieces by Haydn, Bartok, Tchaikovsky were intertwined with songs performed by the Refugee Choir. The lyrics of the songs were originally poems written by Sita Brahmachari, inspired by the work of members of the “Art and Writing” class led by Sita and Jane Ray at “Islington Centre for Refugees and Migrants”.

Romain Malan turned them into songs for the Refugee Choir and arranged them for orchestra.

We also had the honour to perform three pieces by Arian, a Syrian refugee composer. One was an anthem for the Refugee Nation and the Refugee Team at the last Olympics.

75th anniversary of the liberation of Auschwitz

Launch of the World Harmony Choir on World Peace Day

Centenary of the WW1 Armistice 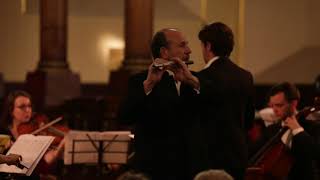 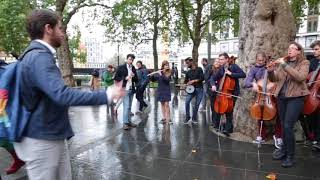 Liberation Day at the Dutch Centre